There are thousands of rescue stories with any natural disaster but this one, Floating Mattress Saves Louisiana Man And His Two Dogs, is a personal one because I met this man and listened to his story; I didn’t see it on the news or read about it in a newspaper. With the chaos of everything going on, I forgot to write down his name but he did give me permission to share his story and my pictures.

Imagine Waking Up and Water is Rising Above Your Mattress

This born and bred southern Louisiana man had been through flooding before but nothing like he experienced in August 2016.

I met him when he was in the Lamar Dixon Expo Center arena, where the LSART, Louisiana State Animal Rescue Team, had set up their animal refuge and shelter area.

He sat off to the side, away from all the action.

Sweat rolled down his happy face and occasionally he’d wipe it off with the white hand towel he kept in his pocket.

The little dog he had on leash looked happy and content. You wouldn’t even know these guys perched atop a bed mattress while the house filled with water.

The area we were in was the holding area for two groups of pets: one being all the pets belonging to the people in the Red Cross shelter and the other group which consisted of the pets of Louisiana shelter workers, veterinarians and people actually working with LSART.

All of the Red Cross evacuees that had pets at Lamar Dixon had to come over twice a day at the very least to take care of their pets. And that’s why I met this man and his dog.

When I finished scooping poop in the large arena I walked over to these two happy fellows and introduced myself. We started chatting and laughing immediately. I told him why I was there, where I was from and about my business. He asked my opinion about Care.com and said he thought about offering dog boarding on occasion, for the extra money. I gave him my opinion about that site, gave him other ideas and places he could post ads, plus gave him some pointers on how to be successful. 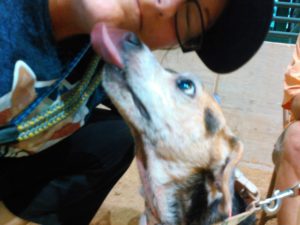 He told me about his past dogs, how he came about getting this little girl, “Ete”, which means summer in French and that he had a tradition of naming all his dogs French names, particularly after seasons; currently he has a ‘winter’ and ‘summer’.

This is a recount of his flood experience: On the first night the rains started, he watched the news but like many Louisiana people, he thought it would pass. Little did he know how bad it would get.

In the middle of the night he woke up to feeling water on his backside. He opened his eyes and saw water creeping over the top of his mattress. Luckily his little French 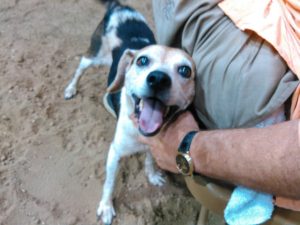 companions were beside him seeking dry land or they might’ve drifted away!

Just in the nick of time his neighbors floated by in a canoe and saw movement through the window.

One of the canoers leaned over and knocked on his window to get his attention.

He quickly gathered up his medicine and important items and raised the window, pushed one dog out, then the other. Ete made it into the boat safely, unfortunately his other one managed to escape the men and she drifted away in the fast moving water. They finally found her and pulled her up into the boat.

They came to Lamar Dixon where the Red Cross set up their shelter. There, they all received food, clothing, beds and shelter for the dogs.

The long road to rebuilding would start for him after meeting with agencies in the area. He lost all of his identification and important paperwork, plus he didn’t have renters insurance so he wouldn’t be able to claim any losses.

On the bright side, this man made it out with just the clothes on his back, his medicine, glasses and dogs; thank goodness for neighbors (and canoes)!

I asked if he had any advice for people reading that would read this article and he said, “Get insurance!”